One of the blog posts I read this morning was entitled “Honoring Labor” and it’s short so I’ll paste it here: 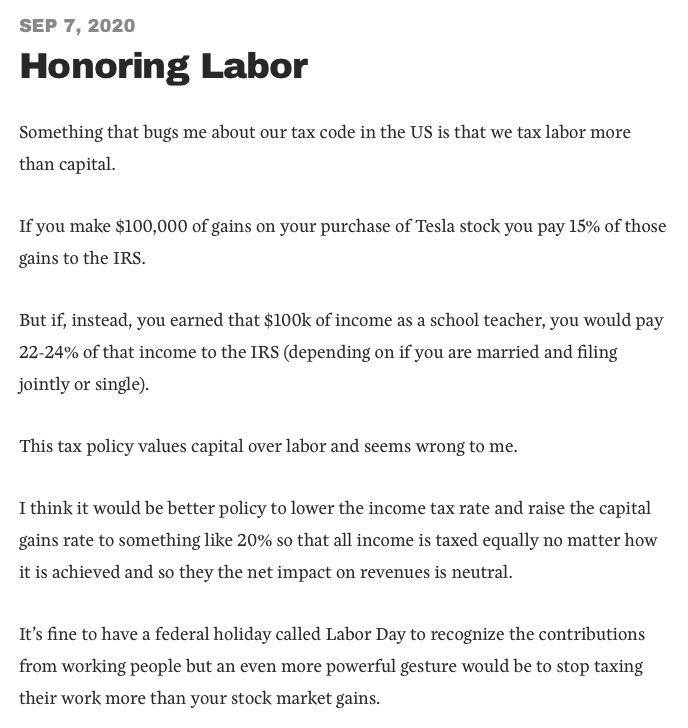 The author rightly points out how wrong it is that labor is generally taxed higher than capital. Let’s imagine the average working adult makes $45,000 per year (~$18/hr x 45 hours/week) versus the $100,000 used in the example. That person’s hard-earned $45,000 is taxed at a rate 50% higher than an individual who, without necessarily working for even a minute, receives the same $45,000 because he/she had $900,000 in capital and earned 5% in passive income.

It’s true that passive income from capital gains, dividends, or other sources may be the result of hard work of that individual in the past and even present, but in and of itself passive income doesn’t usually require hard work. It’s icing on the cake, so to speak.

The solution posed by the author – tax all income the same going forward – is a step in the right direction, but not nearly enough. Treating labor and capital equally would be similar to the idea that treating people of color equally today will somehow make up for the centuries-long head start white people enjoy and would continue to enjoy in an “equal society.”

As the beneficiary myself of income from both labor and capital, and knowing countless people who primarily benefit from passive income, I am 100% certain that those relying on passive income can handle a much higher tax rate in order to give those stuck exclusively in labor – especially the lower rungs of labor – a chance to start catching up. Or at least to start living decent lives. 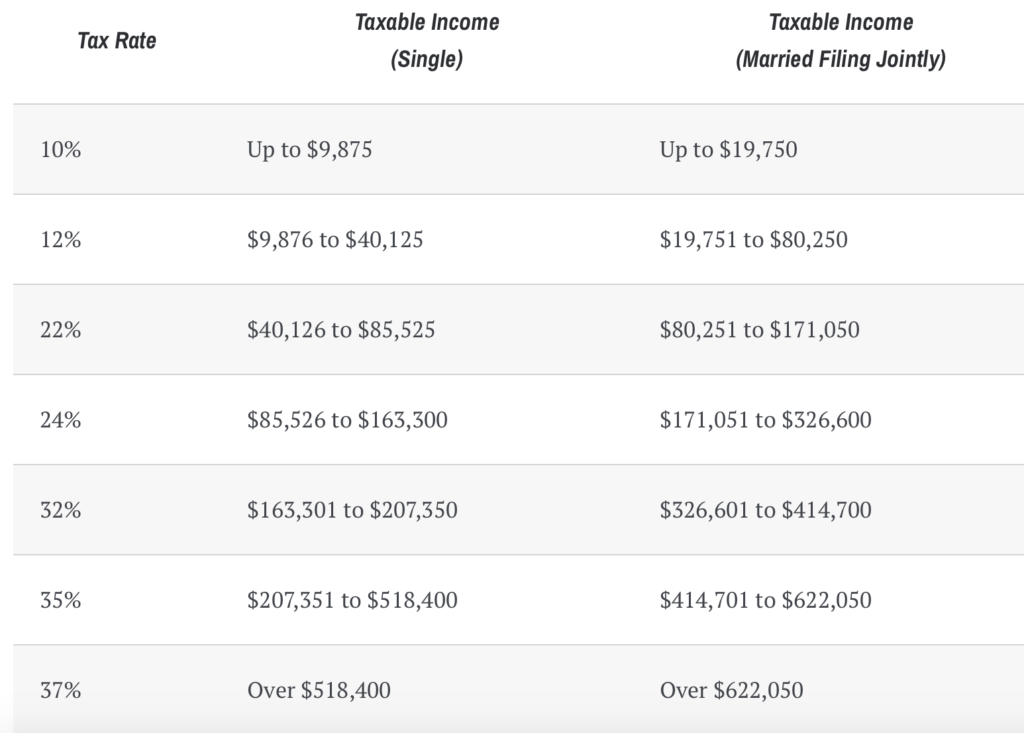 This is just spitballing, but I would argue that a federal tax rate of 5% on W2 income up to $100,000 per year would move things in the right direction. Beyond $100,000 the pressure eases up for most. There would need to be a sliding mechanism, not dissimilar to what is the case today (see chart) to gradually get people to a much higher tax rate at W2 incomes of $500,000 and beyond.

For passive income – from $1 to infinity – today’s federal tax rate is only 15%. During the Reagan years it was actually 28%, before Clinton reduced it to 20%, and then Bush even further to where it stands today. I do find it odd that this wasn’t addressed aggressively by Obama/Biden during their 8 years in office – not so odd that it hasn’t been addressed by Trump 🤪. As someone who has been a recipient of these tax advantages, I would argue that 20% (as the author above argues) would be the bare minimum, but 30% would actually begin the process of reducing the income and wealth gaps that will only continue to widen if legislation isn’t passed in the very near future.

Finally, getting back to Labor Day, I’ll mostly be off today enjoying time with my family. Little to none of that freedom comes from my labor during this past year or two. Instead, almost all of it is from capital gains and passive income, much of which I didn’t even earn myself. Those who have had to rely mostly or solely on their W2 wages to support their livelihoods are very likely working for those wages on this day just as they do every other day. So to be honest, not only have we not yet figured out how to honor labor in general, we haven’t even figured out how to do it on the one day of each year named in labor’s honor.